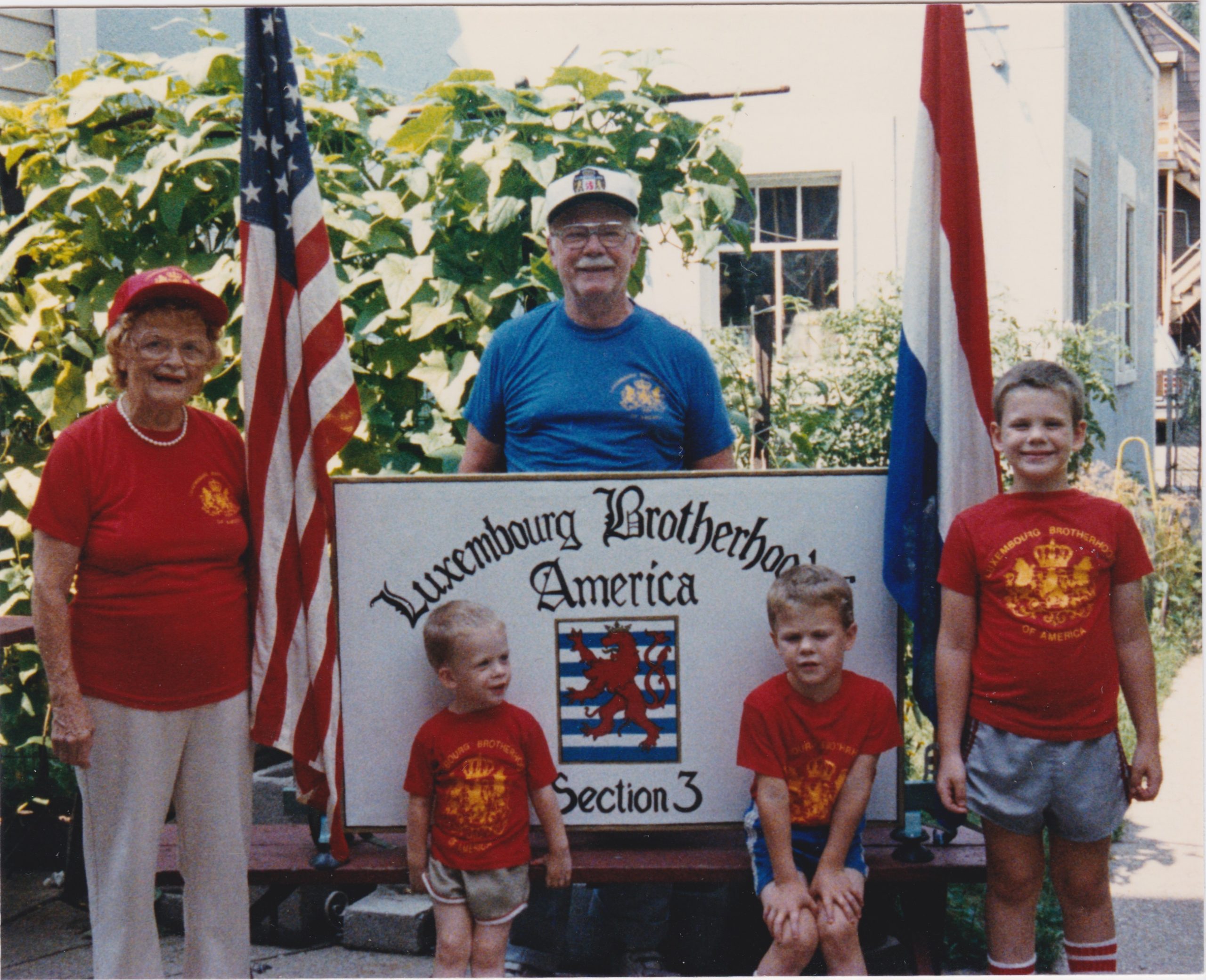 (“Words are but dwarfs, examples are giants.”)

Before jumping in and starting a blog about Luxembourg, I took some time to really think about what I wanted to write about and what voice I’d have in doing so. As much as I want to write about the country of Luxembourg, I have yet to set foot inside its borders and visit the villages of my ancestors. It’s been sitting at the top of my Bucket List for quite some time now, and looking back, mid-life, it’s hard to believe that throughout all my travels I have still yet to make it. Twice I’ve traveled to Europe, once to Spain, and once to France for work, and my attempts to visit were both foiled by a change in shooting dates/travel dates.

He was an extremely proud Luxembourger and Chicagoan, and might I add, the best second father I could have ever asked for. He was as loving as he was a sharp teacher, and as you can imagine growing up in the same house with him, meant that my brothers and I were raised to be very proud of our Luxembourg & Chicagoan heritage.

Let’s start with a little history. My Grandmother, Margaret Hildegarde (Soufal) Schroeder was born on March 28th, 1915, in Vienna, Austria, and entered the United States via Ellis Island at the age of 10. My Grandfather, Anthony (Tony) Joseph Schroeder, was born at home at 6225 N. Hermitage Ave. in the Edgewater (High Ridge at the time) neighborhood of Chicago on April 1st, 1915.

Great Grandpa Peter (21) immigrated to the United States on March 10th, 1903, with his cousin Johann Scholtes (20), arriving in New York at Ellis Island. They traveled to Chicago and Iowa where they met with friends and family. They traveled west across America landing them in Washington State where they worked as lumberjacks for an extended period. They traveled back to the Midwest working side jobs in copper mines in Wyoming, and spent a short time as cowhands, before eventually arriving back in Chicago to work in construction.

Great Grandpa Peter (31) married his first wife, my Great Grandma Anna Winandy (26) of Eschdorf, Luxembourg on April 14th, 1913. They did not know each other when they lived in Luxembourg; however, their villages were only 16 kilometers apart, (small world). They met in Chicago via mutual friends and moved to 5124 N. Oakley Ave. in the Ravenswood neighborhood. They had four children, (John Peter, Anthony Joseph, Marguerite Marie, and Madeline Margaret). Tragically, In September 1918 they lost their daughter, Marguerite, to the Spanish Flu Pandemic. Five months later, in February 1919, Anna also died from the Spanish Flu Pandemic which claimed over fifty million lives worldwide after the First World War.

Great Grandpa Peter was devastated by the tragic losses in his family. Amid getting his affairs in order, working and taking care of the children, as fate would have it, later that year he met Jeannie (Jenny) Beccavin Wood. Born in Paris, Jenny’s maternal roots coincidentally spawned from Bigonville, Luxembourg! They fell in love and were soon wed, in December 1919.

Great Grandpa Peter and Great Grandma Jenny purchased what would become a Three-Generation Family home at 1710 W. Barry Ave. in October 1920. Over the next five years, they had three children together, (Robert Peter, Anna Elanore, and Margaret Josephine). Jenny also had a daughter, Evelyn, from a previous marriage.

In the span of 41 years, Great Grandpa Peter lived an incredible life. He moved to a different country at the young age of 21. He traveled and worked across it, eventually establishing himself in a trade-in a major city. He had eight children, and raised nine, with two wives. He experienced great loss losing a daughter, Marguerite Marie in 1918, and the first love of his life, Great Grandma Anna in 1919, to the great Spanish Flu Pandemic.

Great Grandpa Peter was very fortunate to have found the second great love of his life, Jenny, who stuck by his side as they were hard hit by the Great Depression, and the dark times of WWII, especially having two sons serving active duty in the war at that time. After receiving news about the Battle of the Bulge landing in his village of Bigonville, he was terrified for his family back home not knowing whether they had survived the attack. Meanwhile, Great Grandpa Peter was dealing with his own personal battle. He was diagnosed with stomach cancer.

At the age of 25, Grandpa Tony and Grandma Margaret were married on August 31st, 1940, in Chicago. With the birth of their first daughter Antoinette Joan in July 1942 and their first son Peter Thomas in December 1943, Grandpa Tony and Grandma Margaret began to grow their family. Tragically on March 22nd, 1944, at the age of 62, Great Grandpa Peter lost his battle with cancer and passed away in his home at 1710 W. Barry Avenue in Chicago.

Four years later, in November of 1948, Grandma Margaret gave birth to their third child, Mary Lynne. With a quickly expanding family, Grandpa Tony and Grandma Margaret bought the house on Barry Ave from Great Grandma Jenny. They moved their family into the Barry home in January 1949. Between 1949 and 1954 they gave birth to three more children, (Joseph Anthony, Kathryn Ann, and Anthony Paul). They raised six children in the Barry home (three girls and three boys), who would eventually grow up and give birth to 30 grandchildren! That’s where I fit in!

My mother, Kathryn Ann Schroeder, was born November 12th, 1952, in Chicago and married my father, Richard Martin King, on February 9th, 1974, at St. Alphonsus Catholic Church‎ on the Northeast side of Chicago‎. My father was born on November 26th, 1953, in Chicago‎, only half a mile away from the family home at 1710 W. Barry Avenue. My parents raised their six sons at the Barry home while living in the home with Grandpa Tony and Grandma Margaret. My family of eight lived in a three-bedroom one-bath second-floor apartment.

Grandpa Tony was a long-standing member of the Luxembourg Brotherhood of America Section 3, and a shining example of how to preserve our Luxembourg heritage. He started taking me to LBA Section 3 meetings at the age of seven. My brothers and I, and our cousins, were members of the Luxembourg Kanner Kouer which sang at a great deal of Luxembourg events.

In fact, one of the events was broadcast LIVE on Luxembourg Radio when we sang at the Chicago Brauhaus in August of 1993. I was 12 at the time, sang soprano, and had a solo in one of the arrangements. My Grandpa Tony was so proud that he told the Luxembourg Press that my last name was Schroeder, instead of my actual last name, King (from my father’s side). My mother and father laughed about it as they had great admiration for the family and community values Grandpa Tony was instilling in us.

Growing up in the inner-city of Chicago, in a lower-middle-class neighborhood with a very large Catholic family, meant family vacations included local theme parks, zoos, and state park camping. As a family, we were all actively involved together in Cub Scouts, Boy Scouts, camping, sports, and music. I remember always looking at pictures on my grandparent’s walls of them traveling to Luxembourg, Florida, and all over Europe when they were younger. I remember always thinking to myself that one day I’d get to see Luxembourg, too.

Grandpa Tony was always so excited when he was getting ready for his Section 3 meetings. You could tell that he really loved it. Like a cold beer on a Sunday afternoon watching the CUBS game, it was his happy place. He knew everyone and truly wanted to spend time with everyone. In fact, several of Grandpa’s female Winandy cousins were part of the LBA social club before women could join the LBA.

Here’s a truly great example of how the LBA keeps family connected. Great Grandpa Peter was the only one of his siblings to migrate to America. One of his younger cousins, Will Scholer, traveled to Chicago in 1966 from Luxembourg and looked up descendants of Peter Schroeder’s family by contacting the LBA.

He came across Grandpa Tony’s address and showed up knocking on the door at 1710 W. Barry Ave, unannounced! It was a grand reunion. He told him about his aunts who were still living in Luxembourg! Those Aunts had hoped to learn about their brother Peter and whatever had happened to their brother’s family.

Grandpa Tony was so overwhelmed to discover that there was still Schroeder family in Luxembourg, including first cousins and two aunts who were his father’s sisters and still living. He dropped everything and traveled to Luxembourg for the first time with Grandma Margaret to reunite with his family in 1966!

To say the least, Grandpa Tony was an extremely social person who valued the love for family and friendship above all else. He instilled that quality into all his children, as well as, into me and my brothers, and all their other grandchildren. I could see, even at a young age, that he poured his heart into everything he did.

Grandma Margaret had to spend the last six years of her life in a nursing home, and Grandpa Tony went EVERY SINGLE DAY to visit her during that time. I strongly believe that Grandpa Tony kept himself going just to make sure that the love of his life, Margaret, passed along peacefully. Two Pillars, living examples of positive morality, passed just like that, within six months of each other in 2007 (Grandma Margaret on April 30th & Grandpa Tony on October 27th). The year they passed, that time in my life was a blur. It was one of the most difficult periods of my adult life, thus far.

They left behind a legacy. An enormous family that continues to grow and blossoms with active participation in the Luxembourg Brotherhood of America Section 3, with aunts, uncles, cousins, and second cousins all socially engaged keeping our Luxembourg heritage ALIVE! Not many families are as lucky as ours is, and we know it! In 2016 when the right to reclaim Luxembourg citizenship became an option, many of our family members took advantage of the opportunity to reclaim our nationality and became Luxembourg citizens, including myself!

So here begins my Bucket List Blog for everything Luxembourg. Call it my checklist for travel and itinerary for my first and future trips. The purpose of this Blog is also meant to honor my grandfather for leading by example, and truly being the personification of preserving the Luxembourg heritage for our family line.

In this blog, I plan to bring you exciting news crossing all spectrums of Luxembourg History / Culture / Food & Drink / Sports & Current Affairs. My goal is to enrich you, the reader, with the great heritage of our small country, by continuing to enrich myself with my family’s heritage. Hopefully, we’ll discover a little more about ourselves in the process, and what draws us all together as a Luxembourg community.